THE BOOK OF THE DEAD

The Book of the Dead is the common name for the ancient Egyptian funerary texts more correctly known as “The Spells of Coming Forth by Day”. The Book of the Dead was not a single document. It was a compilation of spells, hymns and illustrations. By teaching passwords, giving clues, and revealing routes, the Book of the Dead enabled the deceased’s spirit to overcome obstacles in the underworld. The Pyramid texts of the (2,600BC) were the earliest recorded way of providing this instruction to the dead. The “hymns” or “utterances” were carved into the walls of pyramid chambers. 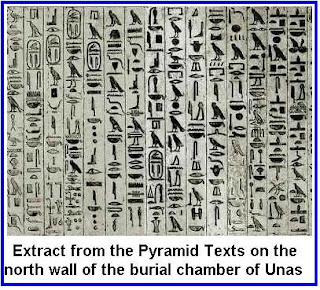 Later similar information was carved inside the coffins of the Middle Kingdom (2,000BC). By the time of the (1600 BC), the Book of the Dead had developed further. It was written on a papyrus scroll and interred with the mummy.

Most people desired to have a Book of the Dead interred with them. We are fortunate to have several examples that have survived to modern times. Each papyrus was hand written in hieroglyphs and illustrated by the scribes. The longer and more decorative the version, the more it would “cost” in terms of offerings of goods and time to the temple. If the prospective owner of a Book was wealthy and his death not untimely, he might commission a scribe to write a text based on his personal choice of spells and chapters. 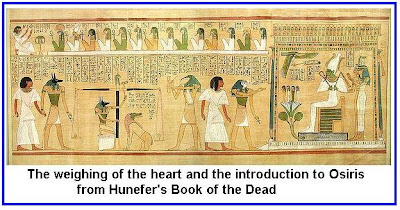 The papyrus scroll compiled for the Royal Scribe of the Divine Offerings who name was Ani was originally 78ft (23.8m) long, separated into 37 sheets. The scroll is now in The British Museum. We will examine this Book in more detail later. Less wealthy clients would have to make do with a ready made text, turned out in funerary workshops, with spaces being left for the name of the deceased to be inserted later.

In the , spells were illustrated with pictures. In many manuscripts the vignettes constitute a row of pictures, with texts placed beneath them. The texts are divided into individual spells or chapters, about two hundred in total, though no single papyrus so far discovered contains them all.

Egyptian religion was based on the worship of up to 2000 gods and goddesses. The two chief gods were Amun-Ra and Osiris. Amun the “king of gods” and Ra the “sun god” were combined into a single deity. Osiris was the “god of the netherworld” who ultimately decided on the fate of the deceased’s spirit. The dead were given the title “Osiris” to indicate their deceased status.

Extracts below are taken from “The Egyptian Book of the Dead” [The Papyrus of Ani – Royal Scribe of the Divine Offerings] translated by Dr Raymond O. Faulkner (printed in 1994) with illustrations based on the facsimile volume produced in 1890 under the supervision of P. le Page Renouf and E.A.Wallis Budge. Printed by The in Press. A complete translation of Ani’s Book of the Dead by E.A.Wallis Budge may be found at http://bit.ly/aMixqO, but Dr Faulkner’s more recent translation is considered by many to be far superior to that of Wallis Budge.

What did Ani’s spirit expect to find and what did he have to do as he stepped through the False Door of his tomb into the world of the dead?

The spirit’s first activity was to recite a hymn of praise to the Sun-god Ra, often depicted as being raised above the horizon by the scarab beetle god called Kheper. The hymn commences with the words “Hail to you, you having come as Kheper, even Kheper who is the creator of the gods,” and continues with fulsome praise of Ra in all its forms. Ani then requests to be permitted to journey with Ra on the Night-bark (through the underworld) and on the Day-bark (across the sky). “May he grant that I see the sun-disk and behold the moon unceasingly every day.” The hymn ends with the words “may I be received into the presence of Osiris in the . For the Ka of Ani.” 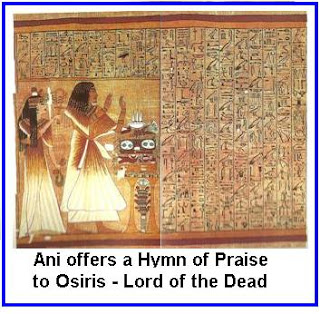 The second hymn is to Osiris. The god of the dead is lauded with titles such as “Great God”, “King of Eternity” and “Lord of Everlasting” and ends with the plea for the pleasures of the afterlife, “May there be given to me bread from House of Cool Water and a table of offerings from Heliopolis, my toes being firm-planted in the Field of Reeds. May the barley and emmer which are in it belong to the Ka of the Osiris Ani.” 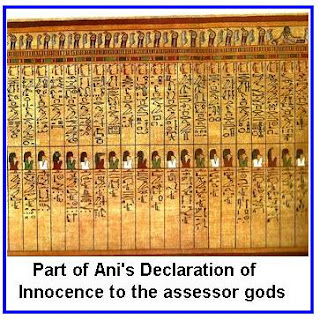 An important aspect of the final judgement of the spirit of the dead is the ‘declaration of innocence’ . In a form of “negative confession”, the spirit recites a list of all the transgressions he has not made. He calls on the names of each of the 42 assessor gods (one for each nome or province of the ancient land). The declaration states such things as:-

O Wide-strider who came forth from , I have done no wrong.

O Fire-embracer who came forth from Kheraha, I have not robbed...

O Swallower-of-Shades who came forth from Kernet, I have not slain people...

O He-who-sees-what-he-has-brought who came from the house of Min, I have not (wrongly) copulated…

And so forth. Some of the sins do not seem particularly serious to our eyes 3,500 years later, but they must have had relevance in their day.

O Ihy who came forth from the Primordial Waters, my voice was not loud…

O Possessor of Faces who came forth from Nedjefet, I have not been impatient…

O Upraised of Head who came forth from the shrine, I have not stolen the Khenef-cakes from the Blessed.”

”The most important chapter occurs early in Ani’s Book. Straight after the hymns of praise comes a Chapter known as the ‘Chapter for not letting Ani’s heart create opposition against him in the God’s Domain.’ This chapter contains “The weighing scene” and “The introduction of Ani to Osiris”. Ani’s heart is placed on one pan of the balance and a feather (the symbol of Ma’at the goddess of justice and order) is placed on the other. Anubis, the canine god of embalming controls the balance while Thoth, the god of wisdom stands by to record the outcome. A horrible beast called Ammit waits hopefully, because if the heart fails the test it is thrown to the beast to consume. Geb the earth god, his daughters Isis and Nephthys and other gods are present. Ani pleads that his own heart will not let him down “Oh my heart I had from my mother!....do not make my name stink to (the) Entourage who make men. Do not tell lies about me in the presence of the god,” 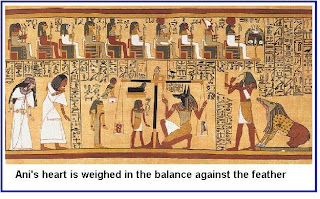 The judge of truth, the god Thoth, declares his findings to the Great Ennead. Thoth says, “I have judged the heart of the deceased, and his soul stands as witness for him. His deeds are righteous in the great balance, and no sin has been found in him...” The assembly of gods of the Great Ennead reply to Thoth, “This utterance of yours is true. The vindicated Osiris Ani is straightforward, he has no sin…let there be given to him the offerings which are issued in the presence of Osiris and may a grant of land be established in the Field of Offerings as for the followers of Horus.” At this point Ani’s heart has passed the test of the balance and he is led by Horus into the presence of Osiris who is shown on his throne with his sisters Isis and Nephthys and with the four sons of Horus standing on a lotus flower. Ani the Scribe is shown sitting before the throne of Osiris. 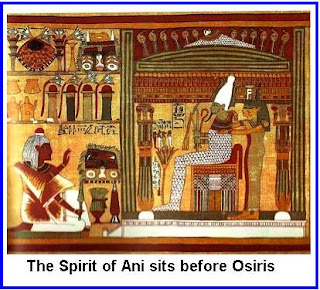 Ani says, “Here am I in your presence, O Lord of the West. There is no wrong doing in my body, I have not wittingly told lies; there has been no second fault. Grant that I may be like the favoured ones who are in your suite, O Osiris, one greatly favoured by the good god, one loved of the Lord of the Two Lands (the Pharaoh), Ani, vindicated before Osiris.”

With the blessing of Osiris, the Royal Scribe Ani passes into the Field of Reeds to enjoy eternity in the afterlife.