FALSE DOORS IN TOMBS AND 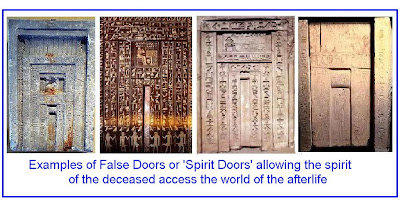 The ‘Spirit Door’ is the threshold between the mortal world and the eternal space where the spirits of those who have died go to enjoy the pleasures of their afterlife. Because it was not a real door, archaeologists have chosen to call this spiritual access a “False Door”, a rather unfortunate choice of name that tends to demean its important role.

In ancient it was believed that a person was formed from clay on the wheel of Khnum the divine potter. At the same time Khnum also fashioned a duplicate of the person. The duplicate or copy was indistinguishable from the person except that it was contained within the person’s body and it was immortal. When a person died and was mummified, this spiritual copy called the person’s Ka was released in ceremony called “the opening of the mouth”. The Ka drew its energy from the memories of mortals and it was invigorated each time the deceased’s name was spoken with love or reverence.

Ancient Egyptians understood the need to demarcate the supernatural access through which the Ka could pass between the worlds of the living and the dead. A newly released Ka, unfamiliar with the ways of eternity, would be directed by spells on the walls to the spirit door. The door frame was often decorated with portraits of the deceased mortal. It was inscribed with the deceased name and the offices held and honours bestowed on the dead individual. In some instances a figure of the deceased was erected in the doorway as if emerging from the spirit world. The Ka passing through the spirit door was able to read the achievements of which it should be proud; statements that could be made to the assessor gods to justify its position in the afterlife.

The access doors to the world of gods and spirits were usually made of stone. The ideal stone would have been granite from , the stone used to line the King’s Chamber in the Great Pyramid, but this stone was difficult to work and not easily obtained. Many doors were made of limestone painted to look like granite. Occasionally false doors were made from wood such as the one on the left. 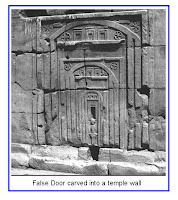 Spirit doors were not confined to the inside of tombs, but could also be found on the exterior of the walls of some temples where they represented a channel of communication between the god of the temple and the mortal world. A spirit door might also be associated with “the hearing ear” chapel of a temple. The god to whom the temple was dedicated resided in the temple and the general public did not have access to the interior of the temple. The spirit door was on the outside wall of the temple so that a plea or prayer meant for “the hearing ear” of the divinity would be heard by the god within the temple. Offering tables or slabs were placed at the spirit door for the petitioner to leave offerings for the god who could use the spirit door to access and partake of the offerings. Naturally it was the priests who benefitted from this arrangement.

What did the Ka expect to find when it went through the spirit door? The first task for the Ka was to take the heart (called the Ib) of the deceased to the home of the gods to be weighed in the balance against a feather. The feather was the symbol of Ma’at, the goddess of justice and order. If the heart was filled with the lightness of good deeds and if the Ka proclaimed its innocence of any evil acts, the life of the deceased was judged by the assessor gods to have been justified and the Ka was recommended to Osiris, the god of the dead for a place in eternity. Thereafter the Ka would return to the tomb and whenever it wished to go through the spirit door it would find fields of plenty, a feast-laden table and a life of pleasure, meeting those who had gone before while awaiting the arrival of those yet to die. Heaven to the ancient Egyptians was a perfect and eternal version of their life on earth in the land of their birth.

The spirit door or false door was a concept that enabled the spirits to access their vision of a perfect afterlife. Without this gate to the spirit world, the Ka might forever be denied the pleasures of eternity.

Posted by Tony Holmes at 7:51 AM No comments:

Dr Zahi Hawass, Secretary General of the Supreme Council of Antiquities (SCA) has made it his mission to repatriate as many ancient Egyptian artifacts as possible. He has already achieved remarkable results. His stated ambition is to recover six major icons of ancient that currently reside in foreign museums. They are, in no particular order; the bust of Nefertiti in Berlin’s Neues Museum, the Zodiac from Dendara Temple in the Louvre Museum; the Rosetta Stone in The British Museum; the statue of Rameses II in Turin; the bust of the vizier Ankhaf in the Boston Museum of Fine Arts and the statue of Hemiunu in the Pelizaeus Museum in Hildesheim, Germany. In a short series of articles we will describe each item and where possible, determine its provenance.

THE STATUE OF RAMESES II

The longest reigning monarch of all time, Usermaatra Setepenre Rameses, known to us as Rameses the Great was the third ruler of the 19th Dynasty. He came to the throne at the age of 18 and ruled for 67 years.

Rameses, the son of Seti I was crowned in 1279BC. During his long life, Rameses’ likeness was captured in stone and pigment more that any other pharaoh. Statues, carvings and paintings have been discovered in from the northern-most part of the Nile delta to the southern border at .

The seated statue in the depicts a very young Rameses, probably at the time of or shortly after his coronation around 1250BC. Rameses had many wives, the primary royal wife being the beautiful Nefertari. Ramses died at the age of 85, an extremely old age when the average life expectancy was around 30 to 35 years. He had over 100 sons and one presumes because it was not recorded, just as many daughters. The seated statue of Rameses is a portrait of the young King in which grace and grandeur are intermixed. The statue is remarkably well preserved, although broken in antiquity it has been reassembled.

Rameses the Great was well known for his military prowess and his exploits at the battle of Kadesh are displayed in the at . According to the Egyptian version of the battle, Rameses was facing the army of Muwattali, King of the Hittites and found himself surrounded by 2500 Hittite Charioteers with only his personal bodyguard to help him. As the enemy closed in around him, Pharaoh Rameses leaped into his chariot, tied the reigns around his waist to leave his hands free, sent forth a great cry for help to the state god Amun and charged six times against the Hittites, finally breaking through and winning the battle. According to the Hittite version, Rameses barely escaped with his life and the battle was inconclusive, but sufficiently costly for the Egyptians that they returned to and sued for peace with the Hittites, a peace treaty that was duly recorded.

Despite the large number of existing statues of Rameses II in , Dr Hawass would like this one to be repatriated from the . There appears to be no reason to justify his demand other than a desire for to repossess this beautiful work of art.

THE LIMESTONE BUST OF ANKH-HAF 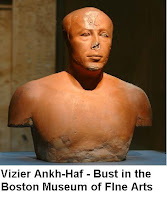 The painted limestone bust of Prince Ankh-Haf dates to the reign of Khafre, 2558-2532BC in the 4th Dynasty.

Ankh-Haf’s tomb was excavated by the Harvard University-Boston Museum of Fine Arts Expedition in 1927, and the bust was assigned to the MFA in the division of finds by the government of .

The bust is made of limestone covered with a thin layer of plaster, into which details have been moulded. The face is individualistic rather than the more common stylised form of the period. From inscriptions in his tomb, we know that Ankh-Haf was the son of King Sneferu, half-brother of King Khufu, and that he served Khafre as Vizier and Overseer of Works. In this last capacity, he may have overseen the building of the second pyramid at the complex and also the carving of the sphinx.

Ankh-Haf is depicted as a mature man with a receding hairline. His eyes were originally painted white with brown pupils. He has a strong mouth over a probable short beard lost in antiquity. He was clearly a man of determination well used to giving orders and being obeyed.

Ankh-Haf's mastaba was the largest in the great at . His bust faced the entrance to a small mud-brick chapel on the east side of the tomb.

In accordance with the terms of the Museum's contract with the Egyptian government, Ankh-Haf’s bust should have gone to the . It was awarded to in 1927 by the Antiquities Service in gratitude for the Harvard-Boston Expedition's work to excavate and restore objects from the tomb of Queen Hetepheres. It appears that the Supreme Council of Antiquities in has no justifiable claim on this artifact.

THE STATUE OF ARCHITECT HEMIUNU 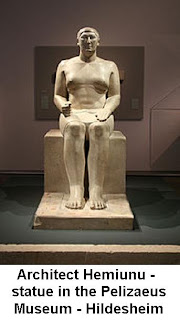 Hemiunu was a son of prince Nefermaat and a grandson of king Sneferu of the 4th Dynasty. There is no information about any wives of children of Hemiunu. He was a vizier during the reign of his uncle, Khufu, and is credited for having been the architect of this king's pyramid at , known today as the Great Pyramid. Among the references to his titles are several priestly titles. Hemiuni was a priest for Bastet, Sekhmet, Mendes and Thoth, although it is possible that some of the priestly titles were honorific. Hemiunu is said to have lived until the 19th year of the reign of Khufu, which means that the Great Pyramid was either completed by then, or that it was completed by a different architect. He was buried in a mastaba (mortuary enclosure) at , near the royal pyramid.

The life-size statue was found in a niche of his mastaba. It depicts Hemiunu, seated on a block throne, his right hand decisively clenched, his left hand resting on his knee. His body is heavy with large breasts, perhaps an indication that Hemiunu was fat or a recognition that he was a wealthy individual. The statue's head has been restored around its eyes, which were originally likely to have been inlaid with crystals.

Hemiunu’s statue was discovered in 1912 by the German/Austrian Expedition, inside the chapel of his mastaba in the western cemetery and is now exhibited in the Roemer and in . Although it appears that the Egyptians have no real or moral claim on this ancient statue, it may be loaned back from to to take part in the opening of the in at Giza 2011.

Posted by Tony Holmes at 4:17 AM No comments: