Time in ancient
By Anthony Holmes

Our modern civilisation is obsessed, with time. At one end of the scale estimates put the age of the universe at 14 billion years and planet Earth at 4.5 billion years, an unimaginable length of time. At the other end of the scale the winner of a race may be decided by hundredths of a second. Scientists in their chronic search for accuracy, divide time to into nanoseconds (one billionth of a second). Physicists hunting for elusive boson particles divide time into yoctoseconds; a million, billion, billion of which are required to make one single second - inconceivable!

When and where did our urge to measure time begin?

It is reasonable to assume that the concept of time has been with mankind since he became a thinking entity. The arrow of time flies inexorably forward from birth to death, never reversing direction. The measurement of time became a challenge to man as soon as he registered the repetitive character of certain natural events, the most recognisable of which would have been the rising and setting of the sun. The rhythm of the sun was a factor that resulted in the ancient Egyptians assigning the sun divine status. The sun was imagined to be Ra, a divinity in a solar boat; or Ra-Harakhte, a high flying falcon; or the Aten, a simple red disc. The sun god influence on man and on his crops caused Ra to attain celestial pre-eminence. The cult of Ra was syncretised (combined) with other gods such as Atum-Ra and Amun-Ra to increase their power. The king was perceived to the Son of Ra and kings’ names invariably contained a reference to Ra’s pleasure or satisfaction with his reign.

The greatest fear the ancient Egyptians had was that the sun, having died in the west at night, would not rise again in the east the next morning. Complex myths arose around Ra’s nightly battle to traverse the nether regions in order to arrive at the eastern horizon where Kheper-Ra would raise the sun into the sky to commence a new day.

The simple regime of the sun rising and setting was insufficient to provide hunter-gatherers with a prediction of the seasonal behaviour of animals and the fruiting of plants. The foragers observed the prime growing period to be the time the sun was warmer and beamed down longer. The concept of seasonal change and the annual cycle was born.

As desertification forced the tribes of proto-Egypt to trek towards the available water in the , hunter-gatherers evolved into farmers. The new agrarian society needed to determine optimal planting and harvesting times and to anticipate the life-giving and sometimes devastating flood. The lunar cycle provided the first measure they needed, but Thoth, the god of the moon proved to be somewhat unreliable. After thirteen lunar cycles Thoth misplaced a day, and after 22 years a whole lunar month was lost. A more reliable count was required. The Egyptians turned to the stars.

The goddess Isis, sister of Osiris and mother of Horus, was associated with the star Sirius, the brightest star in the night sky. Sirius appeared above the horizon just before sunrise (called its heliacal rising) at the time of the flood, signifying the start of the year. As the year progressed, Sirius rose earlier every night until eventually it was no longer visible in the sky at dawn because it had already set below the western horizon. Seventy days later Sirius reappeared just before dawn. By counting the days between one heliacal rising of Sirius and the next, the Egyptians determined that the year comprised 365 days. Armed with this information they constructed a calendar for the year comprising twelve months of 30 days each with five extra days to celebrate the birthdays of the children of Earth-god Geb and Sky-god Nut. The months were divided into three periods of ten days each. Each four month period of the year constituted a season. The three seasons were Inundation (Akhet), Growing (Peret) and Harvesting (Shemu). The Egyptians believed they had the year all figured out. As we now know they were close, but the extra quarter day that we accommodate every leap year, took its toll. By the time 730 years had elapsed the flood was still arriving with the heliacal rising of Sirius, but the calendar had slipped a full six months. The physical seasons were no longer aligned with the calendar.

For the scientists: Sirius does not move retrograde across the sky like other stars, a phenomenon known as the precession of the equinox. Sirius remains the same distance from the equinoxes — and so from the solstices — throughout the centuries, despite precession.  For the same reason, the helical rising of Sirius does not slip through the calendar at the precession rate of one day per 71.6 years, as other stars do. This remarkable stability within the solar year may be the reason the Egyptians used it as a basis for their calendar. No other star would have sufficed. The Sirius year is 365.25 days versus the more accurate measure of 365.2564 days. The small differential would have only created a nineteen day discrepancy over the entire three thousand years of ancient Egyptian history.

The establishment of the year was a great step forward in the measurement of time. However the subdivisions of the day still had to be sorted out. If a day was the period Ra took to sail his boat across the sky, simply dividing it into twelve periods called hours would not have worked. Days differ in length between summer and winter, so hours in summer would have been longer than winter hours. Such division resulted in ‘temporal’ hours. While hours of the day could be measured by the movement of a shadow cast by a stick (precursor to the sundial), measuring hours of darkness was a more difficult task.

Why measure the hours of darkness when one is asleep? A fair question, but man’s curiosity knows no darkness. The Egyptians noted that the helical rising of certain stars matched the first day of the 36 successive ten-day periods and called these stars decans. During any one night, a sequence of twelve decans were seen to rise and were used to count the hours. Ra’s journey through the underworld at night was divided into hours and each hour was assigned a particular challenge. The scenes on the ceiling of beautifully depict the progression of the solar boat through time and the astral constellations involved. (I think of Dendara as the of ancient ). 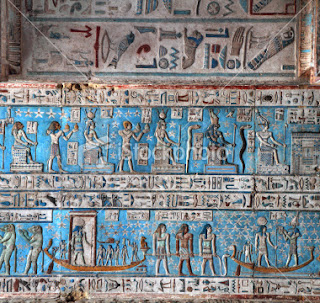 The water clock or clepsydra, basically a conical vessel with a drip hole in the base, may have found early use in some form in and , but its invention is generally attributed to one Amenemhat who made a water clock for king Amenhotep I in in the 16th century BC. It was used to measure the hours of darkness and also to measure the duration of speeches in the courtroom (among other duties). Apparently advocates at law were as loquacious then as they are today! The water clock provided the Egyptians with a device for the repetitive measurement of the duration of an hour, both by day and by night. A water clock carved from alabaster, attributed to the reign of Amunhotep III (c.1380BC), may be viewed in the . 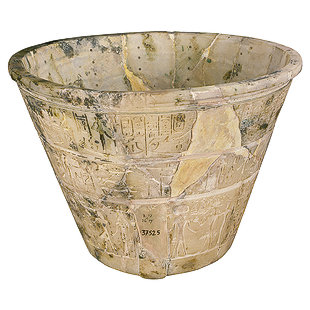 The use of temporal hours (hours of differing length depending on the time of year) was not sufficiently accurate for astronomers. In in c.127AD Hipparchus of Niceae, proposed dividing the day into 24 equinoctial hours based on the equal length of day and night at the equinox. This move split the day into equal periods. (Despite this development, ordinary people continued to use temporal hours for well over a thousand years. The conversion to equinoctial hours in was made when weight driven mechanical clocks were developed in the fourteenth century AD.)

In addition to secular events there were other very important reasons for knowing the time of day and the day of the year - reasons of a divine nature. The ancient Egyptians, particularly the priesthood, required to measure time so that they could fulfil their divine obligations. Gods were believed to take up residence in the statues carved of their perceived likeness. In consequence each statue had to be carefully tended by the priests or the god would leave. Strict regimes of washing, dressing the statue and providing nourishment in the sanctum were established in the temples and these had to adhere to a strict time-table. In addition to the daily routine, the festivals, the ‘holy’ days of veneration allocated to the various gods had to be celebrated regularly, according to the calendar.

There does not appear to have been a long count of years in ancient beginning at year one and continuing uninterruptedly. Each successive reign began a new count of years, so that we have records of year one, two etc. of the king’s reign. However the absence of a continuous record of the dates of events means that historians do not always agree. Choose three books on ancient and you are likely to find three different dates for the reign of the same king! Despite this shortcoming (in our view), ancient Egyptians who were driven by both practical and divine considerations are worthy to be among the civilisations who qualify as the ‘fathers of time.’