Tourists to are generally taken to the major attractions; the pyramids and museums in the area; the tombs of royalty and nobility on the western bank of the Nile at ; the great stone temples from to and a short flight to if they are fortunate. They may also visit the beautiful temples at and Dendera. There are however many other wonders of ancient that have survived and it takes many visits to the country to see them. Three small temples south of barely get a mention in the travel books, but each has its own intriguing story to tell. The three temples are those of Rameses II at Wadi el Sebua dedicated to Amun; the Greco Roman temple at Dakka dedicated to Thoth and the Serapis Isis Temple of Maharraka. 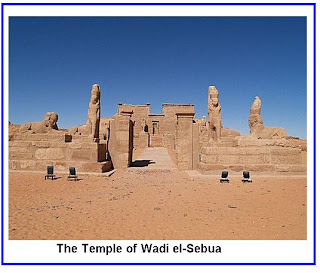 During the New Kingdom's 18th and 19th Dynasties two temples were built about 140 kms south of Aswan in ancient Nubia on the west bank of the Nile. In the 1960s, when the Aswan High Dam was being built, one of these temples was rescued and moved to a new, elevated site several kms to the northwest. The temple was built by Rameses II, and is now known as the el-Sebua. The earlier of Amenhotep III was left to be submerged beneath the rising waters of Lake Nasser. Both of these temples were part free standing and part spéos, meaning that sections of the temples were hewn from the surrounding rock. 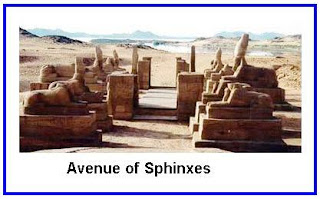 The of beloved of Amun in the field of Amun to give it its full title, was used as a quay or resting place for boats during their descent of the . The local people were inspired by the stone sculptures of sphinxes that lined the entrance to the temple and called the place 'Wadi es-Sebua' or the Valley of the Lions. It is wonderful to visit this temple in the cool of the early hours of the morning just as the sun is rising. The early golden rays shine on the large third pylon and illuminate the avenue of sphinxes. Regrettably the first and second pylons which were built from inferior mud-bricks are no more and only the stone gate passageway through them has survived. The six sphinxes in the first court have human heads, but the four in the second court closest to the temple have falcon heads, the only example of this type of sphinx in .

The statue of Rameses at the entrance to the third court features his daughter Bint-Anath (possibly the daughter of one of Rameses’ Hittite wives). The is dedicated to Amun-Ra and Ra-Harakhte and to the deified Rameses himself. The third court has ten Osiride (engaged) pillars in two colonnades. A ramp leads to the innermost part of the temple, which is cut from the rock. It features a hypostyle hall with 12 pillars. Offering rooms are on either side of the sanctuary. Rameses is shown making offerings to Amun, Ra-Harakhte, Ptah, Horus, Atum, Thoth, Maat, Hathor and Mut. 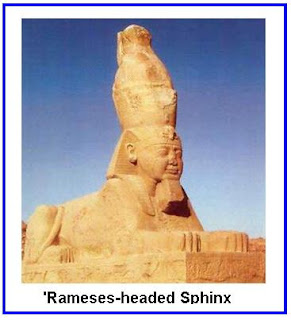 In the 5th century AD, the temple was converted into a Christian church. Some temple reliefs were covered with a layer of plaster on which religious scenes were painted. The plaster layer helped to preserve the original reliefs; the best examples being scenes depicting Rameses adoring the sacred boats of Amun-Ra and Ra-Harakhte. There is also an interesting scene in the central niche of the temple where two statues of Amun and Ra-Harakhte were hacked away by later Christian worshippers and replaced by an image of St. Peter. When the plaster coating was removed from the carved reliefs, it revealed an image of Rameses II offering flowers to St Peter instead of Amun-Ra.

The tourist walks along a well-constructed causeway to the . It is an easy walk, but with a bit of a rock climb at the end. The temple was originally sited about 100kms south of Aswan High Dam, but was relocated to el-Sebua to save it from the rising waters of . Today, the temple sits dramatically on a small bluff overlooking . This is the only Nubian temple with a façade that faces to the north and is oriented north-south to parallel the course of the Nile. The pylon of the temple is now separated from the remainder of the temple due to the missing enclosure walls of the open court. Above the entrance in the pylon, a solar disk with a uraeus extends its wings. On the southern side of the temple, a small entrance leads into the interior of the huge pylon and to a stairway that communicates with several internal rooms. 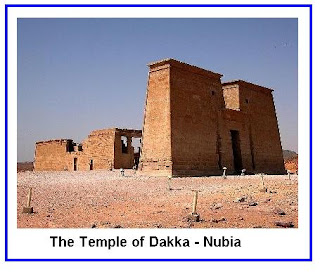 The was dedicated to the god “Thoth of the Sycamore Tree”, the god of wisdom and of scribes. Thoth was held to have two aspects and was depicted either as a Sacred Ibis or as a Baboon; both were considered to be very wise animals. The temple is a relatively recent structure dated to 200 AD or thereabouts. It was not finished because of the onset of Christianity. The capitals of the columns were not carved to completion. A niche that originally held a statue (possibly of Thoth) is over-painted with a picture of St. Peter.

Dakka is intimately connected with the ancient Egyptian myth of the destruction of mankind. As the sun god Ra grew old and feeble he began to fear the power of the Nubians. He sent his daughter Sekhmet the lion-headed goddess to deal with the problem. Sekhmet indulged in an orgy of death and destruction, devouring flesh and drinking blood. This horrified Ra. He sent his trusted god Thoth in his aspect of a baboon to entice Sekhmet back from . Thoth arranged for copious quantities of red coloured wheat beer to pacify her. (Some versions of the myth say red wine). He promised Sekhmet that she would be worshipped along the way back to her home in and he built temples along her return route. Dakka was one of the temples. 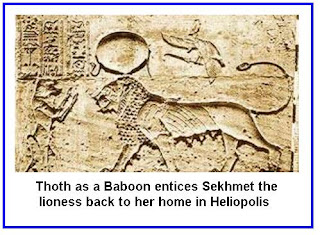 Dakka is unique among temples in that it has an entrance facing south to receive Sekhmet and an exit facing north to make sure she proceeds on her way home. The story of Sekhmet is supported by the carvings in the temple that show the baboon, sent to entice Sekhmet home and later show him lying exhausted and resting under a tree! 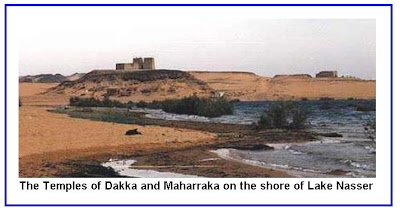 This is the third temple in the Wadi es-Sebua area and the tourist walks downhill from Dakka to the temple. It is a modest building and is unremarkable from the outside. Inside it is decorated with bas-relief carvings. 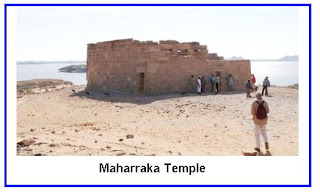 A shoulder high wall is built between the columns on one side. The temple is dedicated to the god Serapis, a hybrid of Osiris, Apis and Zeus. This Roman-built Egyptian temple cannot be securely attributed to any Roman emperor's reign since it was never fully completed nor inscribed. However, since it is known that temple building declined in after the rule of Augustus, the might be datable to his reign. The only part of the structure that was finished is a court surrounded on three sides by columns. The temple sanctuary was never actually built and in addition the temple lacks a formal pylon. 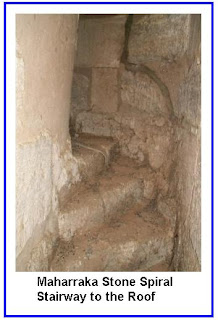 The however features an architectural curiosity at a corner of the court where a winding spiral stone staircase leads to its roof. This is the only Egyptian temple in with a spiral staircase.
Since its former location was threatened by flooding from the due to the construction of the Aswan High Dam, this small temple was dismantled in 1961 by the Egyptian Antiquities Service. It was subsequently rebuilt along with the Temple of Dakka in 1966 at the New Wadi es-Sebua site.
Posted by Tony Holmes at 6:22 AM