Some Cats of ancient (Large and Small)

Cats featured prominently in the religious and
domestic life of ancient Egyptians. 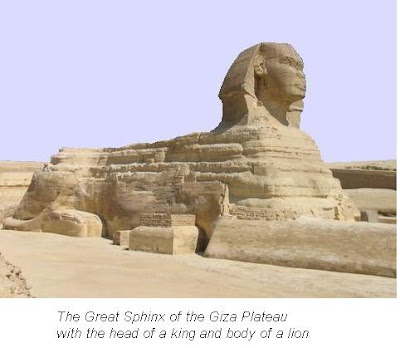 The biggest and most renowned cat is undoubtedly the statue of the great sphinx at with its 73 meter long body of a lion. The sculpture of the great sphinx is dated to c.2500BC. It was supposedly sculpted under the direction of King Khafra whose own face was carved on the human head. There is a considerable body of conflicting opinion regarding the date and the “ownership” of the sphinx, but such discussion will require a separate dedicated article. The sphinx’s face was damaged, not by Napoleon’s canons as is often suggested, but by Muhammad Sa'im al-Dahr, a Sufi Muslim. In 1378 AD, upon finding the Egyptian peasants making offerings to the sphinx in the hope of increasing their harvest, Sa'im al-Dahr was so outraged that he destroyed the nose, and was hanged for vandalism. The great sphinx was called various names in ancient times. Hor-em-Akhet which means Horus-in-the-Horizon may refer to the view of the statue from the cult centre of the sun god Ra () looking west. The Horizon was held to be where Earth met Heaven, where mortality met divinity.
A second ancient name for the great sphinx was shesep-ankh meaning the ‘living image’ (in this case of the creator god Atum-Ra). The phrase shesep-ankh was possibly adapted by the Greeks and became the modern word ‘sphinx’. Alternatively ‘sphinx’ may come from the Greek σφίγγω (sphingo – to squeeze), following the story of the Greek sphinx who strangled anyone incapable of answering her riddle. Controversy surrounding the sphinx is not limited to its age. Its body is considered to be out of proportion to its head and some suggest it may be that of a cheetah; however the tail looks suspiciously leonine! Many other sphinxes have been discovered in , many with the heads of rulers such as Hatshepsut and Rameses II and even a few (at Wadi el Seboua - the valley of lions) with the heads of falcons.

Lions are depicted as powerful allies in Egyptian art. They are shown as guardians of the eastern and western horizons in Inkherha’s tomb and running alongside Rameses II’s chariot in the temple at .

At the other end of the feline size spectrum are tiny faience amulets in the form of cats, each being no more than a single centimetre long. These good-luck charms were sometimes wrapped into the linen folds around the mummy

Many gods were depicted as cats. The creator goddess Tefnut, responsible for the introduction of moisture into the world, is depicted with the head of lioness, usually wearing a heavy wig.

An infamous goddess with the head of a lioness surmounted by a sun disk is called Sekhmet, the Powerful One, mistress of disease, war and strife known as the Eye of Ra. A myth relates that Sekhmet was sent by Ra to chastise humanity. When Sekhmet tasted human blood, she was set to devour all mankind. Ra was appalled and sent the god of wisdom Thoth, in his aspect of a baboon, to entice Sekhmet home with offerings of red coloured beer. Sekhmet was believed to have had a dual nature and she was also seen as a healer. In times of plague, large numbers of statues of Sekhmet were produced to placate her and appeal to her healing powers.

A lesser known cat goddess was found at Beni Hassan. Her name was Pakhet – ‘she who scratches’. During Hatshepsut’s reign a temple was built to Pakhet just south of Beni Hassan. Mafdet was yet another cat goddess. Her form was based on the wild cat (Felis vercata maniculata) which was native to . It is in the guise of this wild spotted feline that Ra is depicted in the tomb of Inherkha (Deir-el-Medina) as the Cat of Heliopolis cutting the head off Apophis, the serpent of the underworld.

The goddess Bastet is the beautiful domestic queen cat depicted sitting regally and often wearing a gold ring through her nose or ear. The domestic cat was introduced into about 2,100BC from the west. 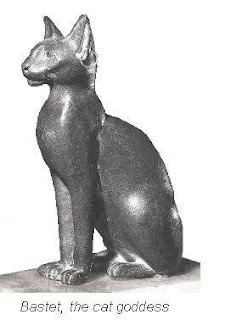 Bastet rose to prominence as a local deity in the region of Bast, now called Tell Basta, where several temples were dedicated to her, including one to Mihos, a lion god said to be the son of Bastet. The cult of cat worship can be traced for two thousand years, from the Middle Kingdom to the Greco-Roman period. 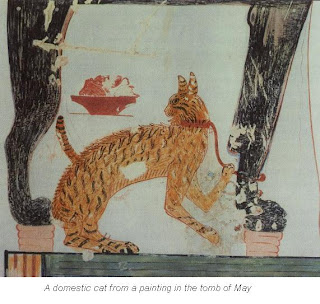 We know a few things about domestic cats in . A painting in the tomb of May (reign of Thutmose III) shows a cat with a collar seated at the chair of its mistress. In the tomb of Menna (reign of Thutmose IV) a hunting cat is shown pursuing wild fowl. Cats were kept as pets and as working animals. They were used to hunt fish and birds as well as to destroy the rats and mice that infested the grain stocks. Cats were considered so valuable that laws were passed to protect them and to prohibit the export of cats. Because Egyptian cats were so highly valued, they were often smuggled out of ; the first illegal pet trade on record!

The ancient Egyptian word for a cat, transliterated from hieroglyphs was mỉw (possibly pronounced meeuw), an appropriate name for a cat. Legend has it that ancient Egyptians did not assign names to their pet cats, but called them all mỉw, the theory being that unlike dogs, cats do not accept a name and do not respond when called. The theory is supported by the recorded action of Prince Djutmoses, eldest son of Amunhotep III, who made elaborate provisions for embalming his pet cat called Ta-mỉw, which just means ‘Lady Cat’.

Writing in 450BC, Herodotus wrote of cats in : ‘The worship of cats is so intense that when a house caught fire the Egyptians appeared to be most concerned about rescuing their cats, the loss of which would cause great sorrow. Anyone guilty of killing a cat would be killed – often by an angry mob!’ He also wrote ‘If a cat dies in a private home by a natural death, all the inmates of the house shave their eyebrows.’
Cat mummies were very common and were frequently bound with linen in two different colors, perhaps reflecting their natural coloring. The mummy of the cat was placed in a bronze or wooden case made in the form of a cat with eyes inlaid with rock-crystal or colored glass paste. The case containing the mummified body of the cat was sent to be entombed at the temple of the goddess Bastet. This act was a blessing for the cat’s owner in the afterlife. Priests at the temples sold mummies of cats and dogs, as well as ibis birds and baboons to pilgrims as votive offerings to the gods. Recent x-rays of animal mummies found in caches in Saqqara show that the priests often cheated their clients and the mummies were often no more than a bundle of sticks and mud, bound up to resemble the animal.

The humour of an ancient Egyptian artist concludes this article. In a cartoon from ancient times on display in the , a cat is shown in the role of a servant presenting a duck dinner to his master, a mouse! 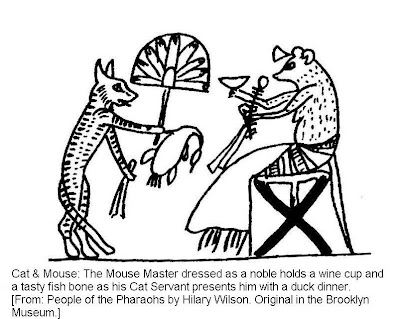